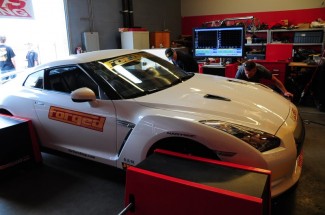 Where do I begin!? We just returned from the Modified Magazine Tuner Shootout in Phoenix, AZ. This was truly a once in a lifetime experience for me. It’s not often, that we get the opportunity to compete against 12 of the top tuners in the country, across all of the major motorsports disciplines: Dyno, Autocross, 1/4 mile, and Time Attack.

Let me start by saying, that we’ve been asked to maintain an information blackout until the article is published. You will find a 10 page article in the August issue of Modified Magazine, which hits the stands in July. That said, lets get started with a quick recap, and my reflections on this terrific event. 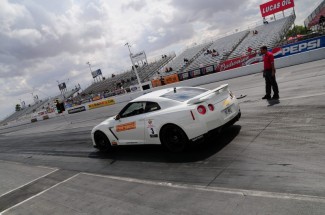 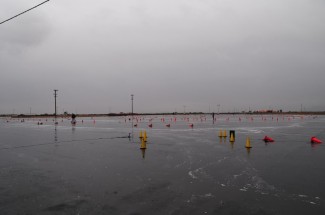 Firebird International Raceway for the Autocross 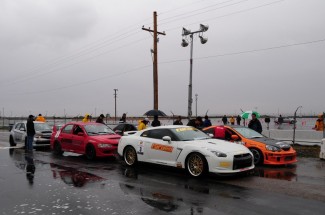 Will Taylor took the controls for the autocross 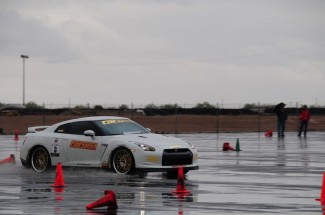 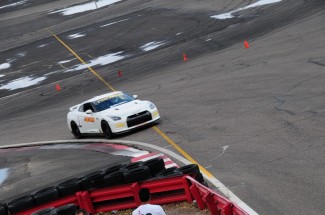 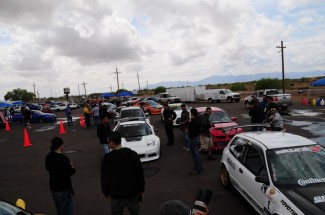 The competition began at UMS Tuning with the dyno power test. This year, they used an area under the curve, calculation, which bodes well for the GT-R’s strong and wide powerband. We ended up putting down 556whp/632trq on their DynoPak hub dyno.

The following morning, we headed over to Firebird International Raceway for the Autocross. We were greeted by this…1 inch of standing water and pouring rains.

Will Taylor took the controls for the autocross, since he had 1 more autocross under his belt than myself…and I had zero under my belt. We slapped on the OEM All-Weather Dunlop run-flats, and gave it a go. He had his hands full, but we still made a very respectable showing, and we gave the much lighter and nimbler cars a good run for their money.

By the time the 1/4 mile test rolled around, the track was pretty dry, but still a bit slippery. We were supposed to be given 3 attempts, but after a competitor lost their rear glass at the 1/8th mark, the track was shut down for 15 mins for cleanup.

There was some drama at this event, and a misstep on our part, so we didn’t do as wells as hoped. Turned out we ran too little tire pressure in the Hoosiers, and the tire was actually spinning around on the wheel, causing an AWD clutch malfunction/limp mode. By the time we figured it out, we were not allowed that 3rd run we were promised.

Despite the setback in the 1/4 mile test, we were still hanging on for contention, and still well positioned for the very important Time Trial. Competition in the Time Trial would be fierce. This is where most of the teams usually shine. Our competitors were running mostly race prepped AWD machines, with significant weight advantages over the GT-R. They were all being piloted by some very accomplished professional race car drivers as well. We knew that nothing would be left on the table, once this event was done.

Due to the weather issues, there was very little practice available for the teams to learn the track. This was my first time on Firebird International Raceway, and I had about 5 hot laps of practice, during which, I put down a bunch of 1:05′s which would have actually been the 1st place laptime from last year. Oh, but , did I forget to mention that the Time Attack would be held at night!!??

So with ZERO night practice, I hit the track knowing that I had just 3 hot laps to put in my best time. I roll out into the track and matted the throttle as I cycle through the gears, and barreled down the front straight. I approach 150mph, and grab the brakes for turn 1. Not bad at all….what was all this talk about some of the turns being shrouded in complete darkness??!!….so I gather the car up, find my line ,and start laying into the throttle. Exiting turn 2, at 100mph, I am greeting by: COMPLETE DARKNESS!!! Turn 3 was completely dark, so I basically grab the brakes, make a quick prayer, and turn in….fortunately stayed on track, and continued through turn 4, although slightly off-line. With each lap, I dropped an entire second, as I tried to acclimate myself to the blindness of turn 2. If turn 2 isn’t nailed, it will seriously affect your speeds through turns 3 and 4 as well, so it’s critical to get this right. Although my times were not quite as fast as our day-time practice, we put down some competitive times. Most of the teams were within 1 second of each.

Although I can’t reveal our final placement, or how the other teams did, we performed very well overall, and look forward to competing in the event next year. I will tell you, that you should find us on the front cover…that’s the only hint you get.

I wanted to recognize Will Taylor (Underpressure) for his performance during the autocross, and setting up the car, and his uncanny ability at cross-country driving. The man is a rockstar of night-time driving…seriously. We thought Texas would never end.

I also wanted to recognize all the other top teams that competed, including GST Motorsports, Yimi-Sport/Full Race, Factor X, Science of Speed, Hassport, Crawford Performance, and all of the others. Part of this experience is speaking with a talking shop with our competitors, and hopefully learning a few things from one another. There was a sense of great competitive spirit, but also a shared sense of community and helping one another. I wish them continued success as well.

One thing I learned, is that victory favors the insanely well prepared.