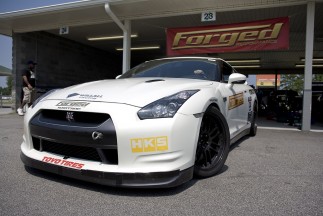 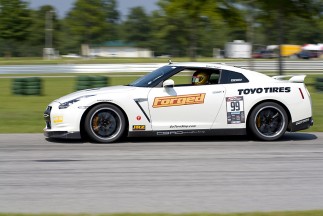 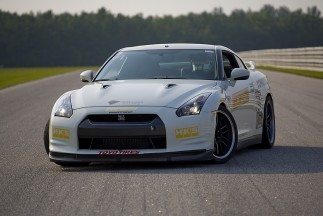 The Forged Performance Motorsports Team is pleased to report another podium finish at last weekends Redline Time Attack Event, at Carolina Motorsport Park. This is their 6th consecutive Podium finish with the Redline Time Attack series. Driver/GM Sharif Abdelbaset was able to hustle the GT-R to a 2nd place finish with a time of 1:40.9, edging out James Elterman in the Takata STi. who captured third place about 2 second behind.  As always competition was tight, but we were able to finish strong behind Ryan Gates in the AMS Evo X. Once again the Forged Performance GT-R performed flawlessly and encountered no problems.

“The car ran marvelously all weekend long”, said Sharif Abdelbaset. “We used Friday to dial in our suspension and air pressures with the 95F ambient temps, so we were ready to go for competition”, he continued. “The Willall transmission cooler and fluids, along with motorsport JRZ triple coilovers allowed to push harder than ever”, said Sharif. Gates, Abdelbaset, and Elterman have been pulling ahead of the rest of the Modified class competitors, as the season heats up, with just two more scheduled events to go for the Forged Performance Motorsports Team.

Look for the team at the next Redline Time Attack in Englishtown Raceway, New Jersey on August 29th-30th. Officials are expecting at least 5000 spectators at this event, and all the top teams will be in attendenace including Forged, AMS, Takata, Gates311, Sierra Sierra, and Factor X. Check our www.redlinetimeattack.com for more details.